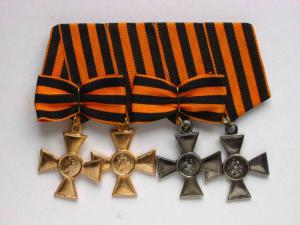 "the Imperial Military order of the Holy great Martyr George the victorious" was established on 26 November 1769 He has short title: "Order of St. George.

Were later established specific conditions for which was issued this commemorative badge.

The order was awarded to the leaders of the army that won ’victory" in the battle with the enemy or captured the enemy fortress. This award can be obtained for capturing the banner of the enemy, the capture of the commander of the enemy forces and other outstanding feats.

The Statute of the awards was also mentioned: "This order can never be removed, for the merit of it is purchased.

This award had four degrees. For the first feat, knight was awarded the order of the 4th degree. And with each subsequent merit the degree of the order was increased. Thus, the order of St. George 1st degree could be represented only person who has made 4 outstanding achievement.

The lowest degree of the order was in the form of a Golden cross with expanding rays from the centre, covered with enamel, white. In the center of the cross on the round pink background was placed the image of St. George on horseback, struck the dragon with a spear.

Many believe that the character depicted the battle with the dragon, and not with the serpent. This is a common error. In heraldry, the dragon symbolizes good.

The error is quite reasonable. In heraldry, as the serpent and the dragon winged. The only difference – number of legs: dragon – two, and the serpent – four. This nuance and leads to erroneous understanding of the image.

3rd degree awards looks no different from the previous one, but have worn it on a neck ribbon, and not in his lapel.

The order of the 2-nd degree, was larger. He was worn on a ribbon at the neck, but it was attached with gold star lapel, on which was engraved the motto: "For service and bravery.

And finally, top, 1st degree order of St. George was a great cross, which was worn over the right shoulder on the broad St George ribbon and star on his chest.

All the degrees of the order were issued with the honorable George ribbon, designed exclusively for mounting of the order on his breast. 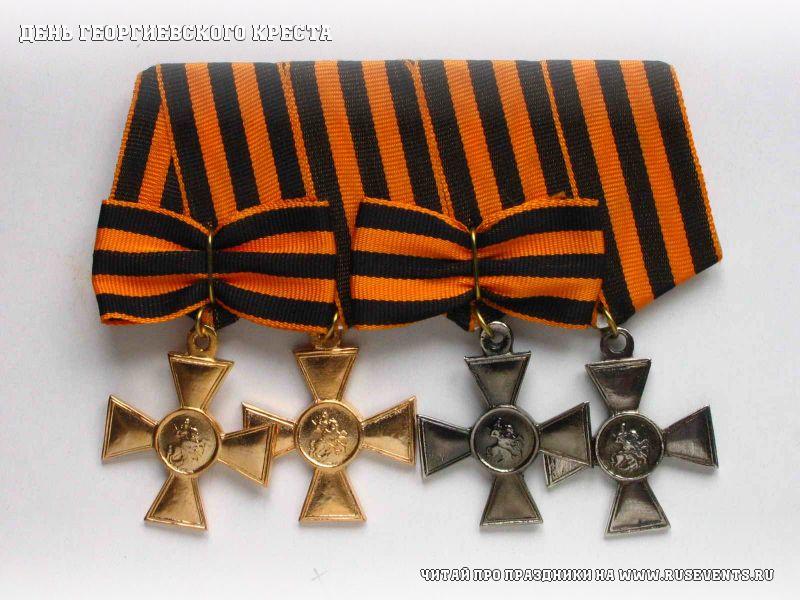